Abbey and Mayor is the fifth expansion to the game. It contains three new figures for each player, an Abbey for each player and a number of new tiles.

The new figures include the Mayor, a follower who may be placed as a Knight in a city. When the city is scored, he counts as one follower per pennant in the city. If the city has no pennants and a player only has a mayor in a city, that player scores no points from it. The Wagon is a follower which can be placed on a road, city or cloister as a normal follower would be. When scored, it may be moved to an adjoining unscored road, city or cloister so long as it does not already have a follower on it and is connected to it by road. A new follower may also be placed that turn... 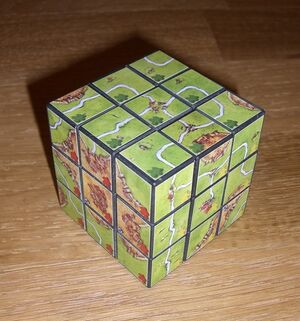 A Carcassonne-styled Rubik's cube made by player Kolja Geldmacher.

To write a new article, just enter the article title in the box below.

Not sure where to start?

Retrieved from "https://carcassonne.fandom.com/wiki/Carcassonne_Wiki?oldid=3784"
Community content is available under CC-BY-SA unless otherwise noted.